The British NDP (National Development Plan) Acrobatic and Tumbling Finals were held at Fenton Manor in Stoke on Trent over the weekend of 19 and 20 May 2012.

Representing the Southern Region in the Grade 1 Women's groups from Southampton Gymnastics Club based in Redbridge, were Jessica Barry (9), Heather Calder (13) and Francesca Beckett (13). The girls had qualified for the finals at the Southern Region Prelims held on 10 March where they won gold with a fantastic routine which had scored 27.11. 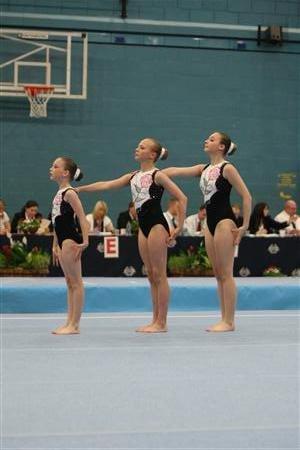 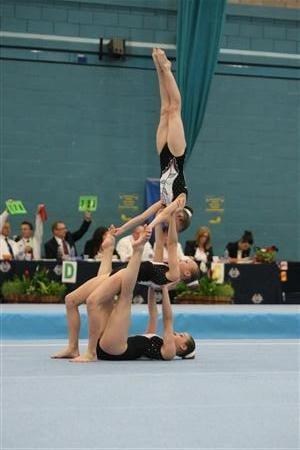 This was the trio's first National Finals and was a fantastic achievement for them as they had only been together for eight months. The girls train as part of the Acrobatic Elite squad at Southampton Gymnastics Club in Redbridge five nights a week and had put many hours of training to get to this standard.

The girls faced stiff competition at the National finals where the winners from every other region in England, Scotland, Northern Ireland and Wales were competing with more than 600 competitors attending the event to decide the overall National Champion in each grade.

Sunday was the start of the Acrobatics in which the gymnasts compete in pairs, trios and fours. Throughout the club's history Southampton Gymnastics Club has produced many great champions in both Tumbling and Acrobatics and our new set of youngsters seem to be following firmly in their footsteps.

The trio had to compete against 12 other groups and were drawn seventh in the running order. They had to compete with the other top clubs in the country and it was obvious from the start that the standard was incredibly high with Spellthorne's trio achieving one of the highest scores of the whole competition.

This did not deter the trio and when their turn arrived, the stepped out onto the floor with confidence and poise and produced an amazing routine; clean, sharp with beautiful expression and artistry. It was the best routine they had ever produced and did themselves and their Club proud. They achieved a very credible score of 26.4 which put them in joint fourth place but as their technical difficulty was higher this gave the girls the advantage and they got the fourth place. They missed out on a bronze medal by .1 of a mark and the silver by .2 which just shows how tight the competition was. 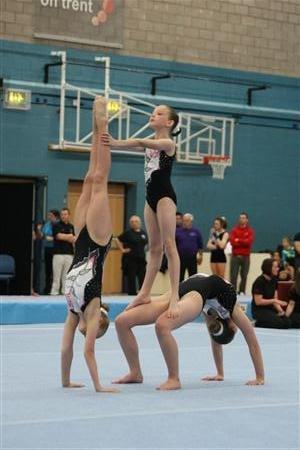 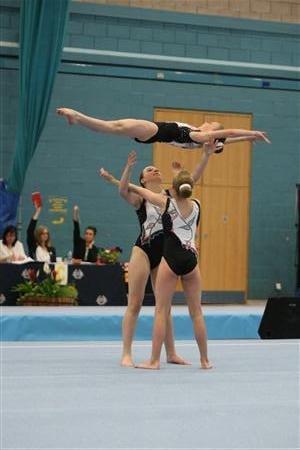 Congratulations to Jess, Heather and Fran for their fantastic achievement, they are a credit to their Club and the Southern Region and just shows that all the hard work has paid off.

A great big thank you to all the coaches, supporters and mums and dads who have all helped the girls achieve such a great result.