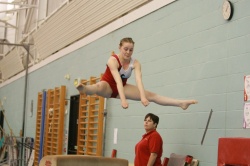 The warm up went well and after a shaky start on bars where Holly got a score of 7.6 which isn’t bad seeing as she has only been working bar for about 7 months. She then went from strength to strength with her next piece being beam, after a solid routine her score for beam was 9.9. Next was Holly’s favourite piece of apparatus floor where she performed a beautiful routine and got a score of 11.20. The last piece of apparatus for her was Vault, with two good vaults Holly scored 10.15. Giving her an all-around score of 38.850. This meant she had not only retained her British title on floor and Vault but also added beam to her apparatus titles as well as become all-around British champion 2013. An amazing result.

Well done to Lorna Clinton, Jess Barker and Kirsty Lynas for their coaching and support of Holy.