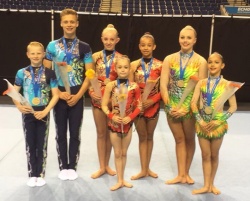 We are proud to announce that Southampton Gymnastics Club is home to three 2016 British Champions!

Ten Southampton gymnasts travelled to Liverpool to compete in the 2016 British Championships. After two successful days of competition all four partnerships secured their place in the finals.

First up for Southampton Gymnastics Club in the finals competition, was our 12-18 Women’s Group; Katy, Rachel and Mia. After fighting off tough opposition to secure a place in the final, the girls went on the floor to perform their combined routine. Their balance work was strong and secure and they had increased the difficulty in their dynamic elements since the recent Turin International; giving them a well-deserved 6th place finish.

Next up to compete was our 11-16 Men’s Pair; Jack and Alex. After two successful routines, their hard work and determination paid off as the boys qualified in first position. The pair performed an outstanding finals routine scoring 26.900 securing 1st position: 11-16 Men’s Pair British Champions 2016.

Steph and Toula, 11-16 Women’s Pair were our third partnership to compete in the finals, the pair qualified in second position which was an incredible achievement in itself, as the category had tough competition. The girls performed a remarkable balance routine which scored a fantastic 27.500 achieving 1st position: 11-16 Women’s Pair British Champions 2016.

Our last partnership to compete, 11-16 Women’s Group; Shami, Beth and Abi. The trio had a large category however the girls successfully qualified in third position. The trio did delivered an astounding dynamic routine in the finals competition and scored 26.350 securing 1st position: 11-16 Women’s Trio British Champions 2016.

A huge congratulations to all of the gymnasts that competed, and of course well done to a superb coaching team!

Southampton Gymnastics Club is home of three 2016 British Champions - join our coaching team bringing gymnastics to all and spotting the champions of tomorrow. If you are interested in coaching at SGC please click here.