Home  »  News  »  The British Championships for Acrobatic Gymnastics
Next » « Previous

25/03/2014 - The British Championships for Acrobatic Gymnastics

A sunny weekend in March and five excited gymnasts set off for Fenton Manor Leisure Centre in Stoke on Trent. The British Cha

mpionships for Acrobatic Gymnastics awaited the team from Southampton Gymnastics Club. First on the agenda was podium training, an opportunity to train in the venue, sound out the facilities and check out the lighting/smoke and main stage for performance and... For the 11-16 trio a chance to try out tumble moves that had been sidelined for two weeks, due to an injury.
A successful session behind them, all moves tackled and achieved; Safia, Stephanie and Abi were well prepared for the hottest contest of them all: 11-16 women's groups. Similarly, senior men's pair Kieran and Farai were happy with preparations and the coaches and gymnasts had a real air of ...let battle commence !

First to take the stage on Saturday morning were the three young ladies ! Drawn right at the end of the running order, the girls danced energetically through their lively dynamic routine, completing every skill with their customary precision, including a spin combination with total perfection, and nailing every landing cleanly. Taking the statutory penalty for the size differences they scored 26.660 and had gained in confidence, knowing that technically they had a score which would sit among the top six.
Later in the day, Kieran and Farai stepped into the spotlight of the senior competition to perform their balance routine. To the dramatic opening notes of their atmospheric music they began their campaign with a rock solid, one-arm combination balance. Kieran effortlessly pushed the boundaries out with cut through to a flat top planche, the nerves were holding steady. A slight loss of focus at the close of the routine cut short the final one-arm balance but the score 25.830 was just reward for some stylish balance work, for the boys first outing as seniors.

Soon after, the girls re-entered the arena, dressed in stunning purple they performed beautifully, their emotional and elegant balance routine. A rock solid stack, good clean shapes on their transitional balance and a controlled entry to the split stag handstand to close the story, as they has flowed and expressively danced the whole story. A minor wobble on a simpler element kept the score low, but again, without the penalty for height the trio ranked among the best in the land. Their final placing of 15th was justified by the height deduction but doesn't really do justice to their excellent performances today.

There are ordinary days and there are extra-ordinary days. Sunday 23rd March ended up as the latter!
The trio stayed to watch and cheer as the senior men's pair continued their competition.
Kieran and Farai warmed up confidently and the full range of senior skills were all working well.
Out onto the floor, they ventured for the second time- modern lively dance, unusual striking leotards and the full range of advanced skills: caught straight back, pitched doubles, handstand catch and clean twisting somersaults. Everything was clean and solid, a demonstration of precise and accurate landings and the score of 27.140 reflected this. Qualifications for the final was assured and well deserved.

Late in the day, they had to finally raise themselves for the most challenging routine of all, one that they had never previously performed- combined. Packed with all their most difficult moves, somersaults, twists and one- arm handstand and flag combinations and complex choreography. So many skills, one after the other, no one dare blink in case they missed something !
The final skill landed, clear ending pose, applause and cheers, the score 26.740 Kieran and Farai became Senior British Men's Pairs Champions ! 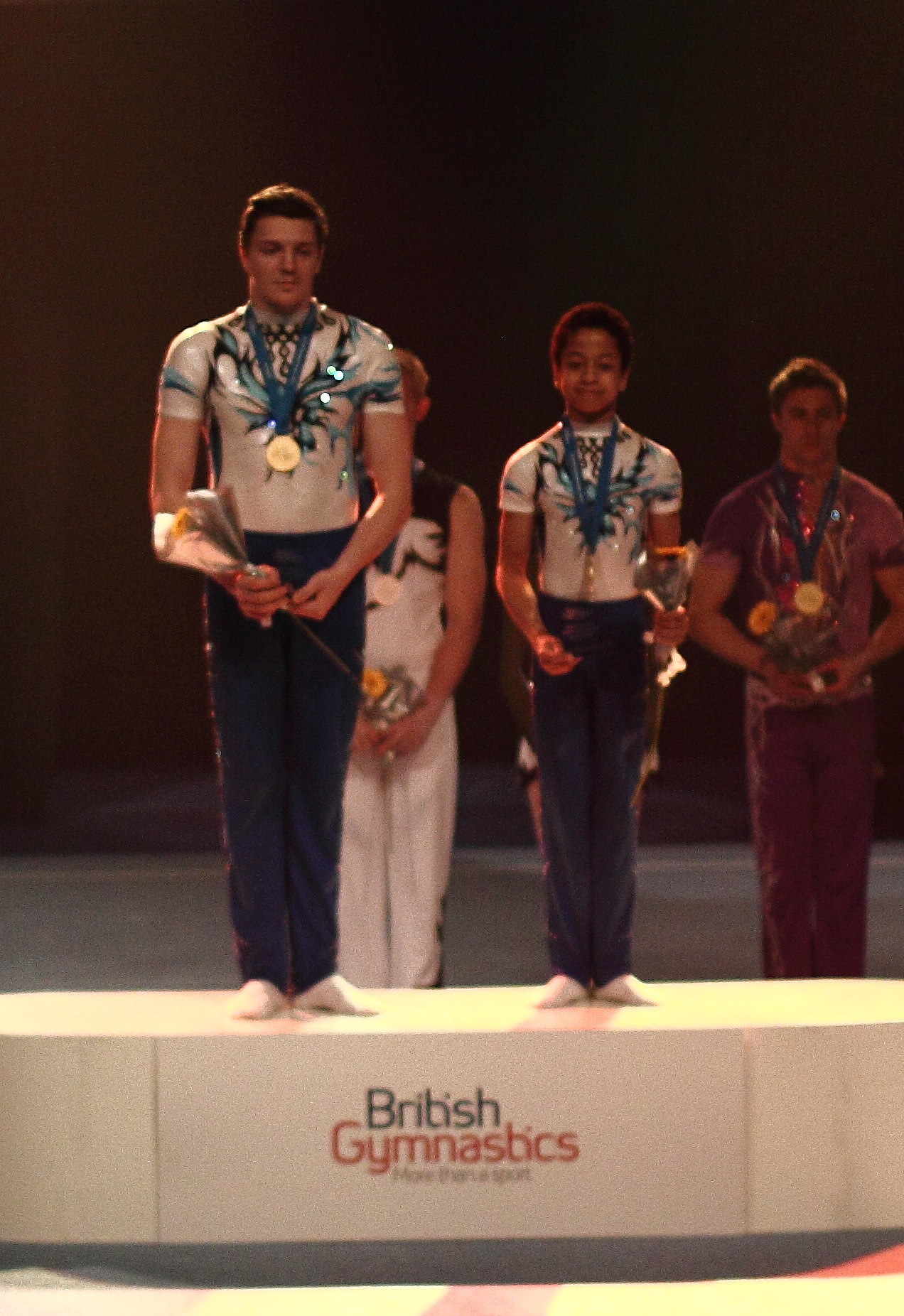 Standing on the podium as British Champions is a rare opportunity- out of thousands of young sports people, not many achieve this accolade and here were the boys in their first year as seniors. The whole club back in Southampton glows with pride at their achievement and praise goes to their awesome coaches Keri Llewellyn and Caroline Hodgson.
An inspiration for all the younger gymnasts and coaches. Fabulous result Kieran, Farai and Keri.