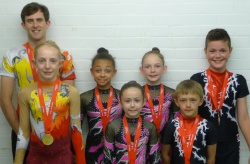 A long journey. A busy weekend. No one would have missed this one! Seven gymnasts from the Southampton Acrobatics Squad journeyed all the way to Stoke-on -Trent to represent Southampton Gymnastics and the Southern Region Team at the National Championships.

The weekend dawned on Friday May 30th for podium training and a sneak peek around the whole venue, a valuable experience for the younger and less experienced members of the team. Weekends away are such an exciting part of the gymnastics journey, establishing friendships and building bonding opportunities for the gymnasts. Memories to form extra dimensions to the career and life of each performer.

Young Men’s Pair, Bradley Whitcombe and Tyler Brewer, from Southampton Acrobatics Club Squad had qualified for national finals in March. Inexperienced but keen and eager to give of their best, the youthful pair had worked hard with their preparation, under the guidance of coaches Jess Barker and Kirsty Warren. The warm-up room, at Fenton Manor, was buzzing with gymnasts preparing but the gymnasts held their heads high and maintained total focus. As they stepped out onto the floor, to present their grade 2 routine (choreographed by Ellen Stafford-Watson) they were the last to go in the category. Dressed in contrasting black and red and with a strong dramatic tone to their routine the boys took the floor. Smooth, smart, and accurate they demonstrated their skills at the highest level as well as presenting the routine with precision and personality. Pleased and satisfied with the performance, the gymnasts waited for the scores …a deep breath, and they had done it ! 26.950,Third place, bronze medals and the highest artistry score in the section for Bradley and Tyler. Proud parents and coaches watched the young pair step up onto the rostrum at National Level. Well done Bradley and Tyler, everyone at Southampton Gymnastics is proud of you.

The following day started and ended with Out of Age mixed pair, Craig Carter and Bethanie Goodwin from the Acrobatics Elite Squad. A long break between their two routines meant concentration had to be maintained all day. Coach Jan Mulholland had come prepared, his own ‘throne’ or shall we say “chair” for the warm-up room which brought many smiles and comments but meant that the long day was well planned for, just like his plan for the gymnasts. Craig and Beth began the day with a classically choreographed mixed pair routine (choreographed by Matt Flye). Beautiful, elegant and flowing, Craig swept his young partner around the floor to strong classic music. Handstands, levers and complex combination skills were executed with strong lines and unusual exits. A slight timing error on the difficult ring handstand pulled the score down (26.250), and disappointed with holding second position the gymnasts looked thoughtful and vowed to complete their campaign later in the day.

A little later, the most entered round of the day began, Grade 3 women’s groups. Shami Bright, Jessica Barry and Abi May were representing Southampton and the Southern Region in this category. A focussed preparation, skills smart and ready and choreography aligned the girls appeared to be the youngest and smallest in the section. Sparkling in pink and black, composed and mature they marched confidently on to the floor to begin their routine, Choosing lilting, enigmatic music, they were precision personified; with clean, accurate skills and immaculately synchronised dance, appearing almost as one throughout the entire routine. Delight followed with a score of 27.740, confirmation of third place, bronze medals and the highest artistry score (9.00) of the section! With only 0.16 separating the three medal winning partnerships, the young gymnasts had held their heads high in this competitive category.

And now for the return of Craig and Beth. Dressed in their fire and smoke themed leotards they stepped onto the Fenton Manor Floor to complete their campaign in the Out of Age category. The dynamic routine was packed with complex throws and catches, somersaults, twists and exciting dance steps. The gymnasts worked together beautifully and the dance flowed to the wonderful music. Clean crisp catches, smartly executed tumbles and building to the crescendo of the double tuck somersault and dramatic ending, the gymnasts were rewarded with a score of 27.30 and confirmed as British Champions. They stood on the National podium with pride, knowing that hard work, sustained effort and dedication had built, for them an incredible conclusion.

Southampton Gymnastics are proud of all the gymnasts. They represented the club and themselves brilliantly. Thanks and praise goes to all the coaches involved, our talented team of choreographers and supportive parents.